I quit my job to focus on SerenityOS full time

It was October 2018 and I had just completed a 3-month rehab program at a state addiction clinic in Sweden. I was unemployed, staying with family, and had basically nothing going on.

With no drugs or other vices to pass the time, the days seemed impossibly long. I struggled to find activities to fill them. I enrolled in school for a while, but it wasn’t for me this time either. Eventually I turned to programming, since it’s always been my big interest in life.

Until that point, my career had been focused on web browsers (WebKit at Apple & Nokia). However, I had always been interested in low-level things so I began tinkering with some of that. I wrote a little ELF executable parser.. And an Ext2 filesystem browser.. And a little GUI framework with an event loop..

Out of this tinkering, an operating system began to take shape. I chose the name SerenityOS because I wanted to always remember the Serenity Prayer. I was quite worried about my future at the time, and I figured that this name would help me stay on the good path.

My general idea was to build my own dream system for daily use. It would be a combination of my two favorite computing paradigms: the 1990s GUI and the no-nonsense command-line of late-2000s Unix.

While at Apple, I really enjoyed how most of the software was made under one roof. Not only did this enable super tight integrations, but it made the system extremely hackable for its developers, and you could always find the experts somewhere nearby. I thought I could try bringing that same feeling to the open source world, so I decided that SerenityOS wasn’t going to be a patchwork of packages – no, we’re building everything ourselves! From kernel to web browser, and everything in between.

So I started hacking, day after day. Week after week. Month after month. The project became my rock as I slowly learned to navigate life again.

I decided to record some of my programming sessions and posted them to my YouTube channel. I was very uncomfortable with this at first, but I kept at it since I liked the feeling of just being myself and letting people see me, instead of putting on a mask and pretending everything was fine.

Over time, more people discovered my little project (and my little channel), and many found something that really resonated with them. Since those humble beginnings, it has grown into a vibrant open source community with hundreds of contributors from all over the world. To say that this has been an amazing journey would be an understatement, yet in many ways we are still only getting started.

Until now, I’ve been juggling SerenityOS as a side project while also having a full time programming job.

That all changes today! I just wrapped up my last day at work, and I’m no longer employed. Instead, I will be focusing on SerenityOS full time starting right now! :^)

This is all made possible by the extremely generous support I’m receiving from folks via Patreon, GitHub Sponsors and PayPal! I feel super fortunate to have the trust & support of so many people. Thank you all so much!!

At the time of writing, I’m receiving a bit over $2000 in donations per month. There’s also a modest amount from YouTube (say $150/month), as well as sales of SerenityOS merchandise (another $100).

This isn’t yet enough to fully sustain me and my family, but it’s close enough that I decided it’s time to take a chance and see what happens!

As you probably understand, I’m not trying to get rich by doing this. I’m just a human being trying to stay sane and healthy, and it just so happens that my therapy/self-care project resonates with thousands of people, many of whom want to support it and see where it goes.

It’s truly an honor to find myself in this position, and I promise that I will continue doing my best. Thank you so much for reading this post. I’m gonna have a nap and then we’ll start fresh in the morning! :^) 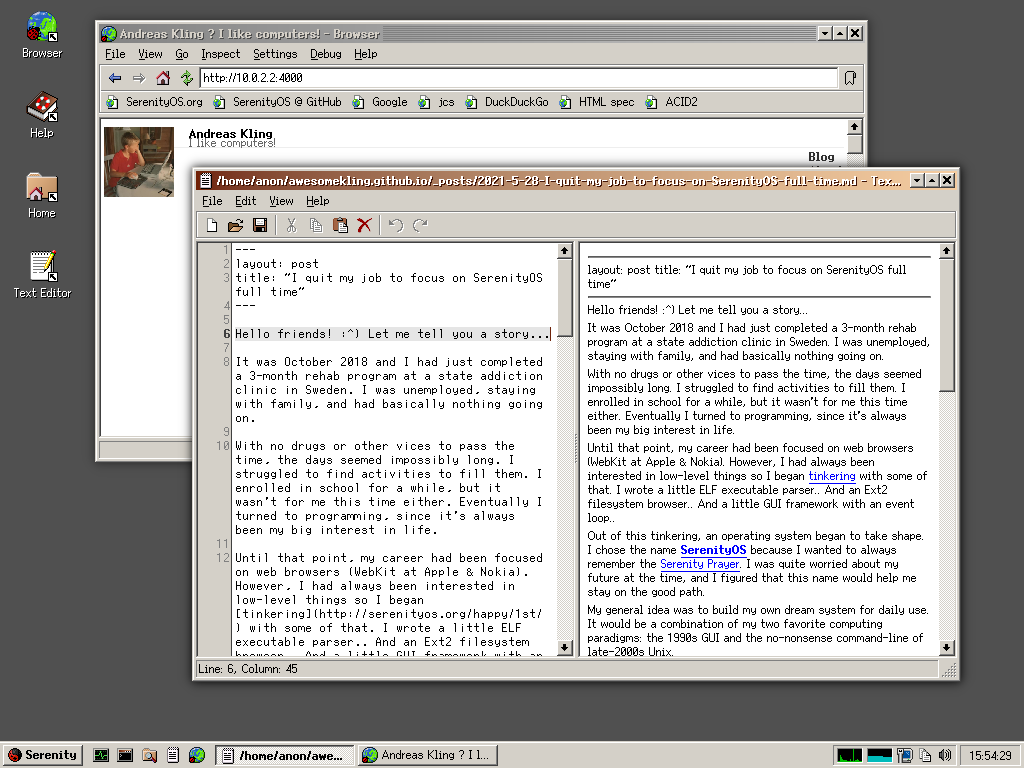